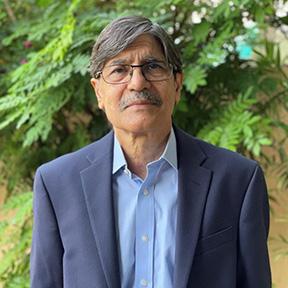 He was a member of the faculty at LUMS when the very first class (MBA Class of 1988) was admitted. He was instrumental in establishing the Department of Economics at LUMS, which is arguably one of the finest economics departments today in the country if not in the region. In 1991 he helped organize a major conference on ‘Financing Pakistan’s Development in the 1990s’, which led to an edited volume by the same title published jointly by LUMS and OUP. He also spearheaded a highly successful four-year research collaboration between LUMS and the University of Essex (1993 – 1997). He was the principal author of a document that for many years was the mainstay of the policies and processes for faculty appointments and promotions at LUMS. He was part of the team that designed the undergraduate program at LUMS with a core interdisciplinary curriculum. He played a lead role in the planning and approval from the Board for the master’s degree program in economics that the university started offering in 2002. As provost he also helped design and implement a structured role for members of the university faculty in policymaking and governance at LUMS.

After retiring from LUMS in 2010, Dr. Nasim helped in the formation and establishment of the Institute of Development and Economic Alternatives (IDEAS). He was appointed Senior Research Fellow at IDEAS in 2012 and served as Director during 2013 ¬– 14. He retired from IDEAS in 2020. During 2017 – 2019 he also held the Mahbub-ul-Haq Chair in the Department of Economics, Government College University.

Dr. Nasim’s publications include papers in the Journal of Applied Econometrics, Journal of Development Economics and International Tax and Public Finance. Dr. Nasim’s recent research interest has been in the area of fiscal federalism and public finance.
Dr. Nasim has a BA, from Government College Lahore, BSc (Hons.) from the London School of Economics, and an MA and a PhD from the University of Essex.