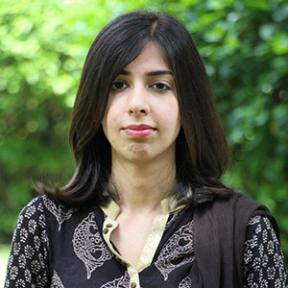 Marva Khan holds an LL.M degree from Harvard Law School, prior to which she completed her B.A.-LL.B from the Lahore University of Management Sciences.

During the course of her LL.B program, she worked as a Research Associate and, along with a group of her peers, started the LUMS Law Journal (LLJ) in 2013, and has been associated with the LLJ since then.  After graduating and completing her research contract, she started working at Rashid Sadiq Corporate Advisory. During this time, she published a paper on comparative constitutional analysis of minority rights under the Pakistani and Indian Constitutions.

After securing the Fulbright Scholarship, she left to pursue an LL.M during which time, she worked as an Article Editor with the Harvard Human Rights Journal (HHRJ), and also participated and presented during the Systemic Justice Conference, 2015 held at the Harvard Law School. Her LL.M thesis, supervised by Professor Mark Tushnet, constituted a comparative constitutional analysis of the explicit and implicit limitations on freedom of speech, by analyzing the jurisprudence emanating from Pakistan’s superior judiciary, and the First Amendment jurisprudence emanating from the Supreme Court of the United States.