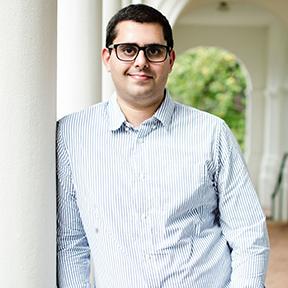 Since 2016, Essam Fahim has been on study leave to pursue his PhD at the Department of Religious Studies at the University of Virginia, where he is a Jefferson Fellow. At UVa, Essam broadly is focusing on modern religious thought, the relationship between philosophy and theology, and humanistic and social scientific studies of religion more broadly. He is especially interested in modern attempts that attempt to reform, revive and revitalize Islamic law, how Islamic thinkers imagine the nature of scriptural hermeneutics and ethics, and how their projects relate to the intellectual and social contexts out of which they arise, how they are read and received, and how they relate to the premodern tradition. He also works closely with the Religion, Politics and Conflict initiative at UVa, and participates in its study of religious language and behavior. Additionally, he is a consultant with the Scripture and Violence project based at the Cambridge Interfaith program, and has contributed to the development of teaching modules available online to improve the quality public engagement on questions of religion and violence. Essam is also passionate about teaching and pedagogy, and has worked closely with the Center for Teaching Excellence at the University of Virginia to receive and offer training in light of current best practices in teaching and learning.
Before UVa, Essam taught at LUMS for three years, teaching the core Islamic Studies course along with courses in the early history of Islam. He completed his MPhil in Philosophy of Religion from the University of Cambridge in 2015, his MA in Near Eastern Languages and Cultures from Indiana University in 2012, and his bachelors from LUMS in 2010

Essam’s teaching and research interests include the fields of Islamic Studies (Islamic law, Islam in the modern period, and Islam in Pakistan), Religious Studies (theoretical, ethnographic and historical approaches), Philosophy of Religion (pragmatism, hermeneutics and ethics) and Religion and Violence (the study of religious language and behavior).