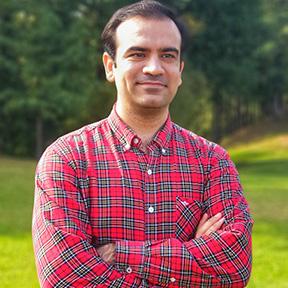 Before joining SOAS for his doctoral studies, Dr. Salman Rafi read for an M.Phil. in Pakistan Studies at the National Institute of Pakistan Studies (N.I.P.S.), Quaid-i-Azam University, Islamabad (2013-16). He wrote his thesis on the origins of Baloch nationalism in Pakistan.

Before joining LUMS in 2022 as Assistant Professor (Politics), he read for a Ph.D. in the Department of Politics and International Studies at the School of Oriental and African Studies (SOAS), University of London (2018-2022). For his doctoral studies, he was awarded the highly prestigious 'SOAS Ph.D. Research Scholarship.'

As a Ph.D. scholar, Salman Rafi received his training in comparative politics and comparative methodology. In 2020, he attended the Institute for Qualitative and Multimethod Research (I.Q.M.R.) at Syracuse University in New York, USA. He is currently the Pakistan Affiliate of Bloomsbury Pakistan in London. Previously, he was a visiting research fellow (2019-2020) at the International Centre for Ethnic Studies (I.C.E.S.) in Colombo, Sri Lanka. In 2020, Salman was associated with the University College London (U.C.L.), where he assisted in a research project exploring the sense of belonging in Pakistan’s Bengali community (1971-present).

Salman Rafi has a growing list of publications. It includes his book, The Genesis of Baloch Nationalism: Politics and Ethnicity in Pakistan, 1947-1977 (Routledge, 2018), and research papers. Salman’s research interests focus mainly on ethnic politics in Pakistan and beyond, the politics of nationalism, comparative constitutional politics, social movements, civil-military relations, regime transitions, and comparative methodologies. His op-eds and in-depth analysis frequently appear in some well-known international media, including Nikkei Asia, Asia Times, and The Diplomat.