Teaching Pakistan How to Save Lives, One Citizen at a Time

Teaching Pakistan How to Save Lives, One Citizen at a Time

Usama Javed (BSc 2013) came to LUMS with a passion for Physics but it was his induction to the LUMS Emergency Medical Services (EMS) that fundamentally changed the trajectory of his life. He wasn’t immediately successful when it came to the training at EMS; he failed the course the first time, but the mentorship from a fellow student helped him pass the course and become an integral part of the society. “A student, Omar Farooq, who was my teacher, inspired me so much and believed in me when a lot of people wouldn’t have. Whenever he would be observing me I would be able to tie up those bandages and take those blood pressure readings, otherwise, I was very clumsy. For the next three years I tackled emergencies such as heart attacks, people falling down stairs, people with burn injuries, and students with psychological emergencies. I became increasingly more confident and in my last year, became head of training and development at EMS. I bonded immensely with my peers from EMS, and some of them became my co-founders at Saving 9.”

Usama’s experience at EMS instilled in him a strong love for teaching. After graduating from LUMS, he taught at Headstart School, Islamabad where he trained students in the same course that is taught at EMS, later going to Columbia University for a Masters of Education on a Fulbright Scholarship. That is where he thought a lot about how first aid courses or medical education can be improved, “The problem with first aid courses around the world, is that it’s all PowerPoint slides and a little bit of time with a mannequin. You don’t actually learn the skills that are required to save a life, you just theoretically know them. So, if someone was to faint in front of you right now, the first thing you would have to do would be to control your own stress, but we don’t teach that in first aid courses.”

When Usama came back, his sister’s house became an impromptu first aid training centre where he trained students, as well as LUMS and Fulbright alumni. This was the start of his organisation Saving 9, which he co-founded with three other graduates from LUMS, Faizan Tirmizi (BSc 2016), Ovais Siddique (BSc 2014) and Norin Yasin (BS 2015). Through Saving 9, Usama and his team have developed first aid trainings that take into consideration real life scenarios and the skills required to tackle them. “We focus on stress management in our first aid courses, including how to control your own anxiety, and how to control the anxiety of the people around you. We cover how to teach these medical concepts to a layperson, someone who is perhaps not even literate, how do you make it accessible at that level, how do you train housewives in first aid so that they can save lives?” Now Saving 9 provides these first aid trainings to countless schools, universities and corporations equipping citizens with tools, resources and knowledge needed to save lives during physical and mental health emergencies.
The organisation’s focus on psychological emergencies is a radical one and extremely necessary in a developing country like Pakistan where there is minimal awareness of issues surrounding mental health. In addition to conducting trainings for psychological emergencies, Usama and his team are also working on launching the world’s second, and Asia’s first, mental health ambulance, “The idea is that this mental health ambulance would be available for people having a mental health emergency. You will be available to call this service, and they will give you psychological first aid over the phone, and then the vehicle will arrive and transport you with empathy and compassion to an appropriate facility.”

Saving 9 wanted to expand their services and programmes in a way that would help entire communities build their capacity to deal with medical emergencies and become self-sufficient. The community they were able to strongly integrate with was Pind Begwal – Union Council 7, Islamabad. Due to the cooperation and encouragement of the Union Council Chairman, Qaiser Ghaffar, the organisation has piloted many of their social innovative programmes there.

In addition to setting up a basic health unit where people can get vocational training on health-related skill sets, Pind Begwal is also where Saving 9 started a community-run ambulance, Maseeha. Usama explains that, “It is now much more than an ambulance; it is a community transformation unit. The trained Emergency Medical Personnel go into the neighborhood, teach people about things like mental health, menstrual hygiene, diabetes etc. What we found is that in the process of teaching people how to save lives, we can transform lives as well.”

The organisation also moved ahead and empowered women in Union Council 7 by providing them with first responder training and launching a women-led ambulance. “This was one thing that gained a lot of traction, and changed the mindset of people in the community about the role of women in the workplace.”  Housewives with no prior work experience were now able to tend to gynecological emergencies in their communities; helping countless women who wouldn’t go to the hospital because the hospitals were so far away. 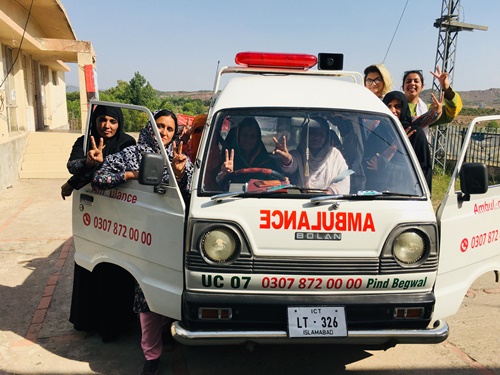 Even during COVID-19, the organisation was able to work with the local government and play a substantial role in mitigating the impact of the virus in Pind Begwal. In addition to launching a campaign in the local potohari language, and convincing masjids to make announcements about handwashing and praying at home, they were able to build a local database and create WhatsApp groups through which anyone showing symptoms could notify the Saving 9 team, who would then go and attend to the patient.

But the focus of Usama and his team isn’t to build a healthcare brand but rather their aim is to bring together all the relevant stakeholders when it comes to physical and mental health emergencies in the country, and scale their projects in partnership with other organisations. “We’re really open to partnerships, and we really want to create collaborations. We’re on the cusp of what I believe is bringing together some really big players on a common platform, like Rescue 1122, Red Crescent and Aman, who do not work with each other, shockingly. We’re working on bringing all these organisations together so that we can coordinate all of our efforts to save lives.”

Usama’s connection with EMS is still going strong. Saving 9 regularly conducts Emergency Management Training Programmes with the society and plans to do first aid training events in different cities across the country. Usama hopes that Saving 9’s efforts will create a society that will be fully prepared to deal with medical emergencies of all kinds efficiently and compassionately. “Prevention is better than a cure. That is why our efforts are centered around providing first aid and basic physical and mental health education. It is also why we work closely with schools and teachers to create nurturing environments for students. By providing communities with the capacity to better take care of themselves from within, we are mitigating current and future generations from the damage being caused by decades of neglect in health and education in Pakistan.”

For more information on the organisation and ways to get involved visit their website here.